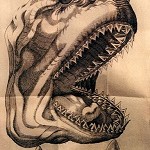 In 1666 fisherman off the coast of Livorno caught a large shark and presented it to Niels Steensen’s benefactor, Grand Duke Leopold II, who  decided that Steensen should dissect the shark. Steensen published his observations in a short treatise,  Canis Carchariae dissection Caput. Towards the end of thedissection, Stensen examined the creature’s mouth and saw the many rows of teeth that are a feature of sharks. He found a striking similarity between these teeth and the tongue-shaped stones, glossopetræ, found on Malta, which he had seen in Ole Worm’s natural history collection in Copenhagen during his student days.

Steensen was not the first to notice the simiarity between the tongue-like stones and the shark’s teeth. Michaelis Mercati, natural scientist and priest had decided, from his investigations, that a shark’s teeth were one thing and the tongue-like stones another. Stensen, with his knowledge of anatomy was able to demonstrate that not only was there an external similarity but also one of structural detail. Of this he says in his treatise:

To now end this digression I will use some of what I’ve deduced about the great tongue-like stones. That they are like shark’s teeth is clearly evident from their shape, as the surface, edge and base are very similar to the corresponding parts of the teeth. If we are to believe the reports, new islands continue to rise up in the middle of the sea, and who knows what was Malta’s first cradle. Perhaps when it was in earlier times covered by the sea, it provided a hiding place for sharks, whoc teeth were buried in the sea bottom, bu that after this shifted, as a result of subterranean activity, the teeth came to be found in the middle of the island.

Ideas about the earth’s past were very rudimentary in the middle of the seventeenth century. Leonardo da Vinci claimed that the origin of the fossilized remains of animals and plants was organic, but he had not given his reasons. Most people, however, bleieved that fossils were the  product of some mystic power in the earth – vis plastica. The story of creation given in the Bible was the starting point for understanding the earth’s origin. Only a few examined the earth’s strata, most people being satisfied with speculation and sophistry, neither of which had any basis in reality