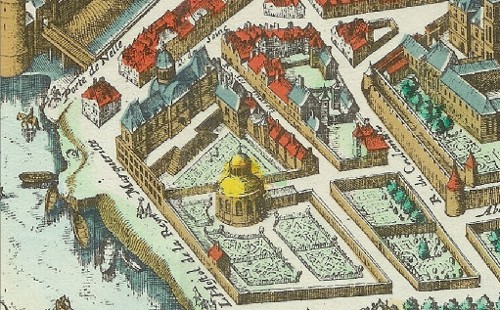 In September 1664 Niels Steensen left Copenhagen again and arrived two months later in Paris. He was the guest of the prominent French academician, Melchisédech Thévenot, and met the French intelligentsia. In Paris Steensen held his famous lecture on the brain. In September 1665 he travelled south via Bordeaux to Montpellier, where he met leading English scientists. In February 1666 he travelled by way of Lyon, Monte Cenis, Torino and Genoa to Pisa and from there to his final destination, Florence. In Florence he was warmly received by the Grand Duke of Tuscany, Ferdinando II, de’ Medici. Niels Steensen was given accommodation in the Palazzo Vecchio and employed as an anatomist at the Santa Maria Nuova Hospital. He immersed himself in the study of art and nature, became acquainted with the most notable men in Florence and Pisa. Within geology, he  made lasting contributions to paleontology, stratigraphy and crystallography. In November 1667, he converted to Catholicism.