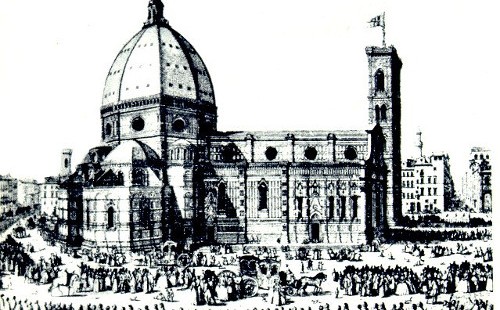 It is not clear when exactly Niels Steensen became interested in Catholicism. Most likely his interest began during his stay in Paris 1665-65, where we know that he discussed religion with several people. A decisive moment occurred in 1666 when he witnessed the Corpus Christi procession in Livorno. While watching the magnificent procession, the thought struck him: Either the consecrated host was a plain piece of bread, and all that venerated it were mad, or it was the real body of Christ. And if so, why wasn’t he also kneeling and worshipping?

The first alternative, that everyone else was mad, was the Cartesian answer. The other alternative, that it was the true body  of Christ, was the Catholic answer. As a result of his Corpus Christi experience Steensen began an intensive study of the Bible and the church fathers. Quite quickly he reached the conclusion that the Protestants were wrong, and that much spoke for the Catholic point of view, but he did not convert.

In fact his hesitation regarding conversion puzzled  his friends in Florence. They could not understand that a man who was so righteous, talented and honest did not accept the consequence of what he had realized to be true. What held him back was that Cartesianism still had a hold on him. Now the alternatives were this:  Either one religion is as good as the next, or Catholicism is the only true religion. Niels Steensen’s problem was that his conviction regarding the mistakes of Protestantism and the advantages of Catholicism was—in his own words—only a moral certainty. In the language of the baroque period a moral certainty is an intellectual, rational certainty based on arguments which allow us to presume that one thing is right and another not, but which still has an element of probability to it. In many aspects of life this is sufficient, and it is also sufficient in science. But for Niels Steensen it was not sufficient for conversion.

It is relevant here to draw a parallel to Steensen’s thinking as a natural scientist. Not because he reasoned as an anatomist in matters of theology, but because he in both matters saw the limits to human cognition. Both in conversation and in writings Steensen advanced many arguments for the Catholic Church, but he never pretended that arguments could do other than lead people to the threshold of Catholicism. He knew that there is no really compelling argument. The final step, the last assurance, is a gift from God, a gift of grace. He knew this from personal experience, not from abstract knowledge.

Steensen’s own religious breakthrough came on the evening of All Saints’ day, November 2, 1667. He had discussed religion many times with Lavinia Arnolfini, the wife of the Luccan ambassador to Florence , but to no avail, and her confessor Savignani couldn’t help him either. But on that day so many arguments and circumstances coalesced/coincided that he experienced a. Steensen experienced a religious breakthrough. In his own words, God took him by the hand and led him to his Church. He confessed, “You have loosed my bonds” (Psalm 116:16).

It is worth dwelling on this bible passage. First, it is significant that Steensen refrains from a description of the moment of conversion, but instead resorts to a bible passage to express his religious experience.  “You have loosed my bonds,” expresses a liberation from the sorrows and worries Steensen experienced while ‘in chains’. Perhaps even more significant is the fact that it was God who loosed his chains and helped Steensen over the threshold which he could not cross on his own, and where intellectual arguments could not help him. It can hardly be stated more plainly that the act of faith is a gift.