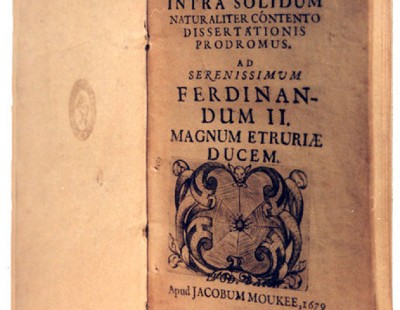 Steno´s scientific pursuits were briefly interrrupted by his decision on 2 November 1667 to become a Catholic. He resumed his fieldwork the day after his confirmation on 8 December 1667. He first went to Pisa collecting fossil shells along the road to Volterra, known for its many fossils and solfatara. From Volterra he proceeded to the Island of Elba.

Steno´s knowledge of the economically important mineral resources of this island is documented in the ”CHAOS” manuscript, and his visit to the island in 1668 in a letter and in ”Indice”. Beautiful crystals of many different minerals occur on Elba. Thus, it is not strange that Steno chose rock crystals and hematite crystals for an illustration in his crystallographic work in ”De Solido”, revealing ”Steno´s law” about the constancy of interfacial angles.

”De Solido Intra Solidum Naturaliter Contento Dissertationis Prodromus”, was a preliminary work written in haste during two months and published in 1669 and 1679. According to Steno it contained the most important of what he had completed. He had planned a major geological treatise, but was unable to complete it because he did not have enough time. Sadly, his notes for this major work have never been found. Today, ”De Solido” is listed amongst the most important  works in natural science in the world.

In November 1668, Steno travelled from Florence to Rome and met Athanasius Kircher. He proceeded to Naples where he probably visited Mt. Vesuvius before he returned to Florence. Early in 1669 Steno left Florence for another long journey partly to do fieldwork, and partly to carry out inspections of economically important geological locations. In the middle of May 1669, he arrived at the court of the Grand Duke´s sister, Archduchess Anna de´Medici. During summertime, her court would move to the Schloss Ambras, south of Innsbruck. This castle housed one of the most important collections in Europe, including a Wunderkammer with spectacular minerals and fossils, a good place for a geologist to make plans for fieldwork.

Besides dissecting and lecturing, Steno inspected salinas (places where salt crystals are produced by evaporation of highly saline water), silver-, lead- and tin mines near Innsbruck, and an emerald locality in Habachthal near Salzburg. This locality is situated about 2000 m above sea level, and was not easily acessible in Steno´s time, but thanks to ”Indice” we know he has been there and collected samples. He also inspected gold and silver mines in Banská Stiavnica and Kremnica and collected samples listed in ”Indice”.

The most important outcome  of the ”Indice” is that it provides a glimpse of the travel route Steno used and what he saw in those periods of his life –  of which we know very little, or nothing. This was documented by Dr. Scherz in 1956. Thus we know from three samples of fossil fishes from the Permian copper shale of Eisleben which he passed through en route to Holland.  The catalogue was not completed before Steno left Florence in 1672 for a position as anatomist in Copenhagen. He left Copenhagen in 1674 and returned to Florence via Holland. In 1675 his life underwent a significant change when he became a priest.