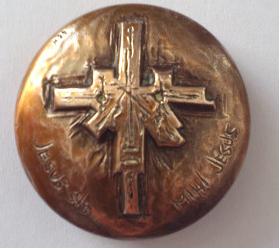 After a return to Copenhagen Niels Stensen went abroad again in September 1664, first to Paris, and then on to Florence. We know that he discussed Catholicism with a Jesuit in Cologne. In Paris he visited Hedvig Margarete von Rantzau, a Danish noblewoman who had converted to Catholicism and become a nun. We know that Niels Stensen also discussed religion with the devout cousin of Melchisédech Thévenot, Marie Perriquet. A Corpus Christi procession in Livorno made a great impression on him, but more influential perhaps were his conversations with good Catholics friends in Florence, particularly sister Maria Flavia of the Annalena Convent and the wife of the Luccan ambassador to Florence, Lavinia Arnolfini. Slowly Niels Stensen began to embrace Catholicism.

In 1667, Niels Stensen converted. That same year he accepted an invitation to return to Copenhagen as royal anatomist, but only for the sake of Faith. Discussions about faith with old friends in Holland and disappointments in Copenhagen led him to return to Florence with the intention of devoting his life to leading others to the Catholic Church.

In 1675 he was ordained a priest. The Duke of Braunschweig in Hannover, himself a convert, asked that Niels Stensen be appointed as vicar apostolic for the Catholic diaspora in Northern Germany and Denmark. He was ordained a bishop in Rome in 1677 and moved to Hannover. In 1679 the duke died, and Stensen left Hannover and became auxiliary bishop in Münster.

During his years in northern Germany, serving as bishop and priest in Münster, Hamburg and Schwerin Niels Stensen showed exemplary integrity, self-sacrifice, and service. He generously housed and gave financial help to converts who had been disowned by their families. He died November 25, 1686 after a short illness, most likely from kidney stones.

Niels Steensen is buried in San Lorenzo Church in Florence. The process for his beatification was initiated in 1975. He was beatified by holy John Paul II on October 23, 1988. In Denmark and the German dioceses of Hamburg, Hildesheim, Münster, Osnabrück and Paderborn Niels Steensen’s feast day is November 25th; In Italy (Livorno, Florence) it is December 5th.