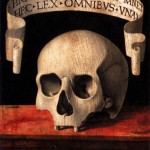 The image of the child Niels talking with and observing the craftsmen in the hustle-bustle his father’s workshop is one of tranquility and security, but it is worth remembering that  life was hard in the 17th century. Niels Steensen lost his half-sister Lisbeth in 1644, his father died in 1645, and that same year Denmark’s King Christian IV experienced a disastrous defeat at war which cost the kingdom revenues and territory. Steensen’s mother remarried, but her new husband, Peter Lesle, died already in 1647. In 1654 an epidemic swept away a third of the population of Copenhagen, and many of Niels’ schoolmates died. From 1657-60 Denmark was twice at war with Sweden and Copenhagen was besieged for almost two years. Denmark lost all of its vast counties of Scania, Halland and Blekinge. This is not to say that Niels Steensen was traumatized by these experiences, but they had an impact on him. They reminded him of  the transient nature of human life. Memento mori.