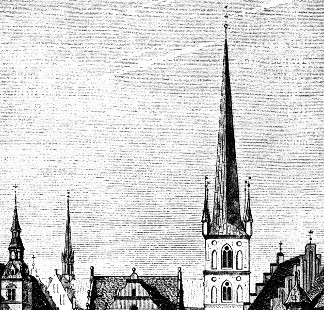 When he left Vor Frue grammar school Niels Steensen studied medicine 1656-69 at the University of Copenhagen under the famous anatomist Thomas Bartholin (1616-80). Bartholin had published a widely-used handbook in anatomy, and was internationally renowned for his discovery of the lymphatic system.

In 1657 while Steensen was at university war broke out between Denmark and Sweden. This first war was quickly followed by a second, leading ultimately to Denmark’s loss in 1660 of its territories east of Øresund: Scania, Halland and Blekinge. Niels Steensen experienced the Swedish siege of Copenhagen in 1658-60, but it is uncertain whether he took part in the defense of the city when Swedish forces stormed Copenhagen on February 10-11, 1658. In the Spring of 1659, while the city was still under siege, Niels Steensen wrote the so-called Chaos-manuscript,  a journal containing  study notes and excerpts of books, as well as summaries of conversations with teachers, small scientific observations and personal reflections which give evidence of a lively, albeit conventional, spiritual life.