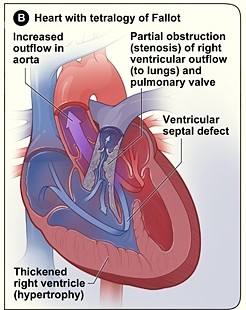 When Stensen was in Paris he performed an autopsy on a stillborn child with heart disease. He was the first to describe this abnormality. Two hundred years later, in 1888, the French physician, Arthur Fallot, observed the same deformity–it is one of the most common congenital heart conditions, with a blue tinge of the skin and mucous membrane. The re-discovery led to its being give the name Steno-Fallot’s tetralogy.  The word tetralogy indicates that the condition involves four malformations of the heart which occur together. The first is an opening in the inter-ventricular septum (i.e. the partition between the right and left ventricles); the second is a narrowing of the pulmonary artery; the third is a displacement of the aorta to the right so that it, in part, emerges from the right ventricle and in part from the left; and, the fourth, a thickening of the wall of the right ventricle. The deformity is a very serious one, and the blue color, which leads to children suffering the condition being called “‘blue babies’, is a sign that the blood contains too little oxygen. Previously ‘blue babies’ died before reaching adulthood, but today the condition can, in many cases be rectified by surgical intervention.

← Ductus Stenonis and the exocrine glands.
Milk is produced in the breasts →