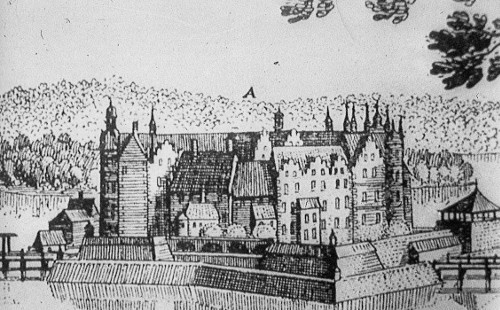 Two years after his ordination Niels Steensen was consecrated a bishop and from 1677-80 worked as vicar apostolic at the court of duke Johann Friedrich of Hannover (1625-79). Although the country was protestant, duke Johann Friedrich—the brother of the Danish king Frederick III’s queen Sophie Amalie—had converted to Catholicism. After the death of the heirless duke, Steensen became auxiliary bishop of Münster 1680-83 under prince bishop Ferdinand II von Fürstenberg (1623-83).  Steensen’s years in Hannover and Münster are characterized by an increasingly ascetic lifestyle combined with unceasing apostolic activity, religious zeal and care for the poor. From 1678 he was also vicar apostolic for the Catholic diaspora in northern German and Scandinavia.

In Hannover the workload was still surmountable, and Niels Steensen had time to continue his apologetic writings which he had begun as a priest in Florence, and he had time for religious and philosophical talks with the famous philosopher G.W. Leibniz (1646-1716).

In Münster, however, he was very busy with preaching and pastoral care, as the dean of Saint Ludgeri Church, as visitator in large parts of the diocese, not to mention the usual weddings, confirmations and masses. In Niels Steensen’s opinion conditions in the Church in Münster were desperate. Local noblemen exerted undue influence on church matters, and the standard of the candidates he was presented with for the priesthood  troubled him deeply.

Corruption during the election in 1683 of the new bishop of Münster caused Niels Steensen to flee to Hamburg. With this as his base he attempted to take care of the large areas of northern Germany and Denmark entrusted to his care as vicar apostolic. In 1685 he went to Copenhagen, and secretly conferred the sacrament of confirmation to a number of people for the first time since the Reformation. In Hamburg he had a falling out with the local Jesuit mission, and had to admit that he could get nothing done under the given circumstances. He received the pope’s permission to return to his beloved Italy, but before he could depart the opportunity of establishing a permanent Catholic presence in Schwerin in Mecklenburg arose.

The prospects of success in Schwerin were poor, but Niels Steensen stayed on and worked as a parish priest until death caught up with him. He died on November 25th, 1686, under great pain, and without receiving the last rites, but surrounded by his friends and with a reputation for great holiness. On his death bed he prayed, “I am suffering greatly, Lord. I hope my pains will encourage you to forgive me if I should waver in my focus on you. Lord, I do not ask you to take my pain away, but to give me the patience to withstand it. If we receive great gifts from your hand, why should we not be ready to accept difficulties as well?  Whether it be your will that I should live or die, Lord, your will be mine. Eternal praise to you and let your holy will be done.”

On the surface of it, the disappointments in Hamburg and the time in Schwerin can be seen as the absolute nadir of Steensen’s life, but from a religious perspective these are the years where he is purified to saintliness. Although he lived in severe poverty, Niels Steensen was radiant with joy and piety, and was well liked among catholics and protestants alike.