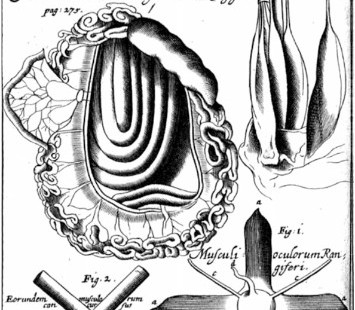 Dissections by the Royal Anatomist

During his sojourn in Copenhagen as Royal Anatomist 1672-74 Steno performed a number of dissections. The best known is his public dissection of a female corpse in the university’s Theatrum Anatomicum preceded by his inaugural address, the Prooemium Demonstrationum Anatomicarum which was held at 2 p.m. on 29 January, 1673. This address was published by Thomas Bartholin in his Acta Medica & Philosophica Hafniensia and in Maar’s edition of Steno’s scientific works, Opera philosophicae (OPH 31).[1] Steno’s student Holger Jacobæus (Jakobsen) gave an account of the lecture and the dissections which took place January 30th to February 8th in a manuscript, Exercitatio anatomica, which is also contained in Maar’s edition (OPH 36).

Steno’s description of the dissection of the muscles of an eagle is found in Acta Hafniensia, (OPH 32).[2] There are no illustrations.

Steno’s dissection of a reindeer was described by his teacher Thomas Bartholin in Acta Hafniensia.[3] The three illustrations are in the style of Holger Jacobæus.