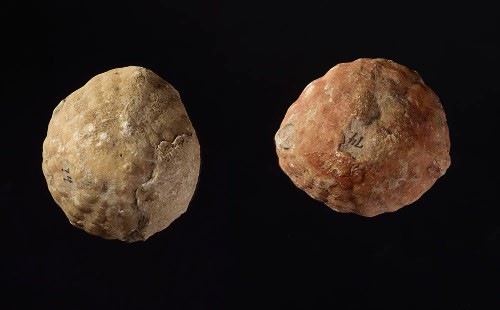 Named in honour of Steno

When a new species of a living organism or a fossil is found it is described and named according to international rules. A name may be based on morphological characters, related to the locality where it was discovered or derived from the name of a person, either the name of the person who found the new species (if it is not the same person that describes it), or a person whom the author of the name wants to honour. The same procedure is applied when a new mineral is found.  It is considered a great honour to have a new species or a mineral named after you.

At least two animal species (found as fossils) and one mineral have been named in honour of Nicolaus Stenonis – Steno. In the following I will present these and elucidate why in each case they were connected with Steno´s name.

Stenonaster tuberculatus (Defrance, 1816) is a sea urchin found as fossils in upper Cretaceous sediments at Monte Magrè, Vicenza in northern Italy. The type specimen, (the specimen that is used for describing the new species), was designated by Defrance in 1816 and given the name Ananchytes tuberculatus. In 1858 however, Desor revised the systematics and described a specimen under the name Stenonia tuberculata, Stenonia being a new genus. However, the name Stenonia had previously (in 1853) been used for a myriapod, thus the international nomenclature rules of priority led to a revision and a new genus name, Stenonaster, by Lambert in 1922. Also, the name tuberculata was changed to tuberculatus as the gender should be the same as Stenonaster.

Desor used the name Stenonia as a tribute to Steno, “who was the first to devote special care to the fossils of Italy” (”qui le premier a consacré un soin particulier à l`étude des fossiles d´Italie”). Eduard Desor (1811-1882) was a German born Swiss geologist. He was a good friend of the French geologist Élie de Beaumont (1798-1874), who was amongst the first to revive the scientific reputation of Steno in the beginning of the 19th century.

Equus stenonis Cocchi, 1867 is an extinct horse. The fossil remains of this species occur in Pleistocene lacustrine deposits in the Upper Valdarno Basin in Tuscany, Italy.

Igino Cocchi (1827-1913), who was professor in geology and director of the Royal Institute for Advanced Studies in Florence, named the horse in 1867. His reason for honouring Steno was that ” In our collection I have for a long time called it Equus stenonis in order to commemorate the ornament that the late Stensen was to the Florentine museums, and because a complete skull of this species which is found there belongs to the oldest objects on which it (the museum) is rich”. (”Nelle nostre collezioni l´ho chiamato da molto tempo Equus Stenonis, per ricordare quella illustrazione del Museo Fiorentino che fu Stenone, e perchè il cranio intiero di questa specie che vi si conserva è fra gli oggetti più antichi onde va ricco”).

In Indice di Cose Naturali, (a list which documents the object in the collection of the Grand Duke and said to be dictated by Steno himself), No 178 is ”A muzzle of a petrified horse with the stone it is found in”. (”Un Muso di Cavallo impietrito con la pietra nelle quale è trovato”). The type specimen, however, was a nearly complete skull, which was said to belong to the oldest part of the collection. Cocchi must have known the copy of the catalogue Giovanni Targioni–Tozzeti produced in 1763 in which Indice constituted part nr. 4. This is why he chose remains of a fossil horse to honour Steno.

The Plio-Pleistocene sediments in the Upper Valdarno Basin have been known for centuries for their rich content of well-preserved mammalian fossils. Besides remains of horses, elephants (mammoths which Steno thought were remains of Hannibal´s elephants), bovines, deer, sabre-toothed cats, bears etc. have been recovered from exposures that may have served as an inspiration to Steno. See Plate XI in De Solido in which he demonstrated the principle of stratigraphy.

Indice No 179-182 list remains of elephants (molars of mammoths), hippopotamus (pieces of teeth) and deer (a piece of a petrified antler). All these specimens were probably also collected in the Upper Valdarno.

Stenonite is a colourless or white mineral from Ivittuut, southern Greenland. The monoclinic mineral forms aggregates of crystals. Stenonite has 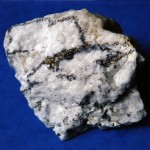 a hardness of 3.5 and the chemical formula Sr2Al(CO3)F5 and was first investigated, defined and described by Hans Pauly (1921-1997) in 1962. It was however recorded as an unknown mineral in 1926. In 1955 it was also found in Copenhagen in a plant with crude cryolite from the cryolite deposit in Ivittuut where mining took place from 1854 to 1987.

The reason why Steno was honoured in this way was according to Pauly ”the astonishing fact …  that the famous scientist Nicholaus Stenonis had never got his name connected with a mineral. Following discussions partly with other Danish geologists, partly with people studying Steno´s life, etc., it became settled that we could allow ourselves to attach his name to the new mineral found in the cryolite deposit in Ivigtut  (now Ivittuut). To a Danish mineralogist (Pauly) it is of course a great pleasure to be able to honour one of the most prominent Danish scientists within geology.  It is fully justified that he has been named one of the founders of geology, especially crystallography, so it is quite natural that his name should be included in the list of minerals named after honourable persons. It is only necessary to point out that he was the first to call attention to the fundamental law for crystals of the constancy of interfacial angles.” (Steno´s Law).