Guidelines for readers of the scientific papers by Niels Stensen

Stensen’s active life in research lasted from 1660 to 1674. His 34 scientific works fall into two main categories: the anatomical works and the geological works. 33 of these were collected and edited in  Nicolai Stenonis Opera Philosophica (OPH) by Vilhelm Maar in 1910. Stensen’s first work in science , On hot springs (1661), was still undiscovered at the time of Vilhelm Maar’s edition.

Stensen’s works were published by Springer Verlag in English in 2013,  Nicolaus Steno: Biography and original papers of a 17th century scientist,  edited by T. Kardel and P. Maquet. In the English version the enumeration given by Vilhelm Maar was retained.

Stensen’s works were published in Italian in 1986, the Opere scientifiche I-II. In this edition Stensen’s De thermis was defined as opus one and the subsequent works followed Maar’s numbering plus one.

The anatomical works can be sub-grouped as follows, with the time and place of origin indicated. 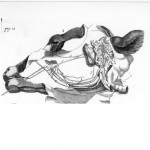 Fig. 1. The left parotid gland and its excretory duct with a probe inserted from the mouth and adjacent lymph gland receiving lymphatic vessels (g) from the chin in a calf (OPH II). Note that the skin flap draws down the vessels from a more straight position in situ. 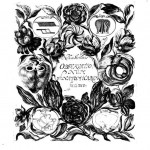 Fig. 2. Baroque title copper from OPH 15, Copenhagen 1664, with hand-writing and drawing in the style of Stensen. 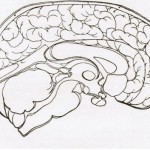 Fig. 3. Sketch of a mid-line section of the human brain by Stensen. 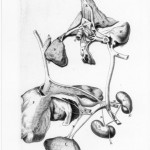 Fig. 4. The pulmoray and peripheral circulation of blood drawn by Stensen 1673 (OPH 33).

6. Comparative works on reproductive organs and foetal growth: OPH 16 and 17 (Copenhagen, 1664); OPH 19, 20, 21, 24, 25, and 26 (Florence, 1668). Stensen concludes in OPH 26 that ovaries in viviparous animals and human females are analogous with ovaries in oviparous animals and should not be termed female testicles.

Stensen’s dissection of a reindeer while working as Royal Anatomist in Copenhagen, 1672, (without number in OPH), was reported by his teacher Thomas Bartholin, and was illustrated most likely by his students.

There are thematical overlaps between the anatomical and geological papers. Thus, the first geological work, OPH 22, contains a consideration of the formation of teeth and the need to know more about this, ”because ignorance of the formation of teeth has meant that the cure of almost all sicknesses affecting teeth is left only to chance. Who can stop tooth decay once it has begun? Who can lighten their pains?” Stensen’s main geological work, the Prodromus on solids, OPH 27, contains an original description of the compartments of the water space in the body with Stensen’s conclusion that the formation of stones, such as bladder and gallstones, takes place by accretion in the so-called external water space of the body.

An interest in stone formation in living beings was evident already in the so-called Chaos manuscript written by Stensen in 1669 as a young medical student, an indicator some of his later research interests.

← The function of ovaries
Extra material, new edition of Scherz’s biography of Steensen →